Crispy Pata is deep fried pig's knuckle (pata), a Filipino favorite dish, believed to be invented(or concocted) and made popular by the restaurant Barrio Fiesta in Manila.

Admittedly, nothing compares to the Barrio Fiesta recipe, but we could always improvise and try to come close.

The pata used for this dish is the lower part of the pig's leg, that which is close to the foot.

Unlike the upper leg or thigh which is meaty(thus usually made into ham) the knuckle is mostly bones, fat and doesn't even have much lean meat.

So why bother with this part of the pig when most of the time you could only get about 25% lean meat, 35% skin and fat and the rest, inedible bones that only Bantay can enjoy?

The kicker is actually the thick, fatty skin that if cooked properly, turns into this crispy and delightful crackling treat that makes it worth all the work especially when served with a spicy vinegar dip. 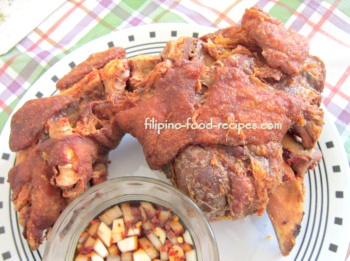 The secret to a great tasting Crispy Pata starts with cooking to tenderize the pig's knuckle in perfectly flavored and seasoned broth.

The pata is then removed from the broth, cooled down, wiped dry and left uncovered inside the refrigerator for at least a day.

The following day, salt and pepper is rubbed all over the outer part of the meat before deep frying.

PRECAUTION : Deep frying a big piece of meat with mostly skin is no child's play, it will definitely splatter and you have to consider how high the oil will rise in the pot once you put the meat in.

The oil must not go over 1/3 from the top of the deep pot once you set the meat in, otherwise, oil could overflow or spill over onto the stove and your kitchen could catch fire.

1 Put the pata in a deep pot and add enough water to submerge the meat. Bring to a boil.

2 Skim off all the scum or the brown impurities that will float on the surface.

3 Add the rest of the ingredients except the potatoes and cabbage, and simmer for 35-40 minutes or until the meat is just tender(but not falling-apart tender).

4 Add the potatoes and cabbage, season to taste and simmer for another 10 minutes.

5 Remove the meat from the pot and set on a wire rack to cool down and dry up a bit.

6 Put the meat in an container without a lid and place inside the refrigerator for at least 8 hours or even overnight.

7 Take the meat out of the fridge, measure 1 tablespoon each of salt and pepper and rub on the meat.

9 Serve with a vinegar dipping sauce or serve with rice and Kare-kare.

Have your say about what you just read! Leave me a comment in the box below.
[?]Subscribe To This Site