It is like Nilagang Baka, except that addition of beef bone marrow makes the soup denser and much tastier.

Depending on one's preference, vegetables such as corn, potatoes, pechay or chinese cabbage, leeks and carrots are used to infuse flavor and give texture.

Some even use lemongrass to give it a citrus-y taste, since the dish is usually served with a dip sauce of Calamansi or Lemon and Fish Sauce.

You will find recipes suggesting that you roast the beef shank with bone marrow first before simmering to make the soup.

This is actually the process in making beef broth from scratch.

Roasting does concentrate the beef flavor but will give you a dark brown broth, that which is used to flavor other dishes.


Writing about cooking with bone marrow led me to find some of its interesting nutritional benefits.

Though these are merely from boiling the bones with the marrow as opposed to adding beef cuts that have could make the soup greasy and fatty.

Many believe that the bone marrow soup has the same effect as the chicken soup to relieve coughs and colds.

And that boiling the bones for few hours extracts necessary minerals from it to help support bone, heart and muscle health.

Just like any other good broth, the key is to simmering for a few hours not just to tenderize the beef but also to concentrate the flavor.

I add carrots, onions and celery in the broth or what the French calls mirepoix, to give depth to an otherwise plain beef broth.

I also use leeks, which tastes like green onion, but that's just a personal preference. 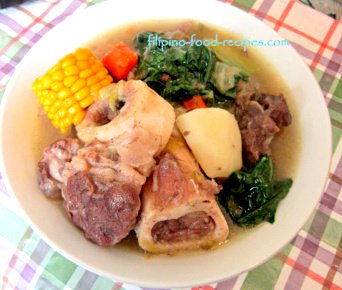 1 Using a deep pot, boil the water with the beef, remove the scum that will float on top.

2 Add the garlic, onion, carrots, and celery and simmer for 1 1/2 to 2 hours or until beef is tender, adding more water to keep the meat and veggies submerged.

3 Put in the potatoes, corn and leeks and simmer for another 20 minutes or until potatoes and corn are tender.

4 Season with salt as needed, then add the Pechay and turn the heat off.

5 Serve the hot Bulalo with rice and a dipping sauce of calamansi or lemon with fish sauce. 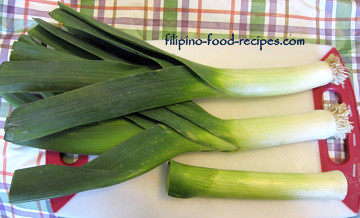