Ensalada Talong is a savory eggplant salad, made from grilled eggplant, onion, tomatoes and chili peppers.

This ensalada or salad is usually paired with a fried food, especially fried whole fish.

The eggplant is grilled over open flame to soften and cook, while charring the skin a bit to easily peel off.

A grill or a stovetop burner can be used to char the skin, but it wouldn't work so well with an electric stovetop.

The test for doneness is that the skin should come off easily from the meat - otherwise, grill for a few more minutes.

A technique to easily remove the charred skin is to set it on a container and cover with a plastic wrap, the skin can be easily wiped off using a paper towel.

The recipe calls for chili pepper, but if spicy hot is not your thing, you could use the red or green bell peppers by grilling them together with the eggplant and peel off the skin, as well.

The bell peppers will give a touch of sweetness to the salty, sour and spicy ensalada.

Lastly, the shrimp paste or bagoong here is used instead of the boring salt and pepper to pump up the flavor.

An alternative to shrimp paste is Fish Sauce, or you could also season with soy sauce if you prefer. 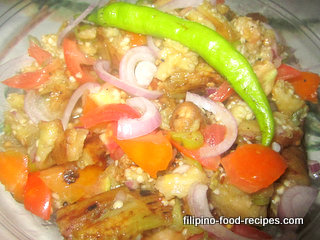 
1 Grill the eggplant to cook and soften, then peel off the charred skin.

2 Mash the eggplant and cut to bite size.

3 Mix all the other ingredients together with the eggplant, add more shrimp paste, if desired.

4 Refrigerate until ready to serve, or serve as it is, with rice and fried fish or pork.