Inihaw na Pusit or Grilled stuffed squid is a relatively popular dish especially in Ihawan or Grilling restaurants in Manila.

For this recipe, I used the large squid or that which is called Lumot, and simply stuffed them with onions, tomatoes and green onions.

Other times, I would use other stuffing like ground pork or chopped squid balls, I pre-cook them before stuffing to ensure they are fully cooked.

Squid, just like shrimp, has to be cooked quickly or they become rubbery.  However, they are more forgiving than shrimp.

So it is either I cook them quickly or cook them for a real long time.  Anything in between makes them tough and somewhat indigestible. 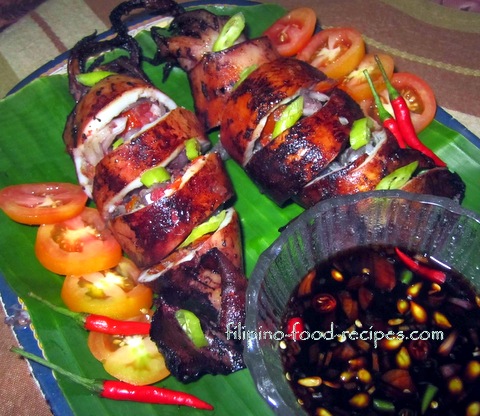 1    Remove the squid head, cutting and disposing parts from the eye socket down (leaving just the tentacles).

3   Marinate the squid and the tentacles with the mixture of soda, soy sauce, garlic, vegetable oil and black pepper for an hour.

4  Mix the vegetable stuffing together, and season with salt and pepper.

5   Stuff the squid and put the head back and seal it with a toothpick or a bamboo stick.

7   Remove the stick and serve with a dipping sauce of calamansi or lemon juice, soy sauce and chili.