Fish Poached in Vinegar and Ginger

Paksiw na Isda is a dish where fish is poached in vinegar and ginger.

Fish is merely cleaned, innards and all removed but with scales intact.

According to the book Philippine Cookery and Household Hints by Herminia Villacorta-Alvarez, the word pak siw "is a native term for pickling fish and meat.

Fish or meat is cooked with vinegar, salt, garlic, and a little water; with or without ginger and sugar."

My mom's recipe for this dish uses long chili peppers for added zing, and she removes the fish scales before cooking it.

On the other hand, my brother's recipe adds ampalaya and eggplant, which are completely optional. 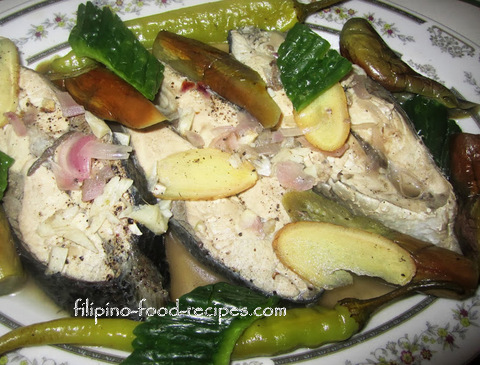 1 Put all the ingredients, except the eggplant and ampalaya,  in a pan and bring to a boil. Do not stir.

2 Add the eggplant and turn the heat down and simmer for 10-12 minutes or until the fish and eggplant are done. Turning the fish over to the other side is necessary if the pan you are using is too wide and the fish is not totally immersed in the liquid.

3 In a separate pot, boil about 2 cups of water and cook the ampalaya for 3 - 4 minutes until tender, then add to the cooked paksiw.  (Cooking the ampalaya separately prevents the paksiw liquid from getting bitter.)

4  Serve with a plate of rice.