This Palitaw recipe is so easy to make and could be done in minutes!

Palitaw or Palitao is a sweet sticky rice dessert made from glutinous rice dough.

The dough is portioned, flattened and shaped like an tongue, then cooked by dropping in boiling water.

Initially, each one will sink to the bottom but once it floats to the surface, that's the indication that it's cooked.

Dredging in fresh shredded coconut will prevent it from sticking together, and a mixture of sugar and toasted sesame seeds or linga is sprinkled on top before serving.

Back home, we would buy the Palitaw served on banana leaves. Women peddlers carry them on a round flat bamboo container on their heads, called bilao. 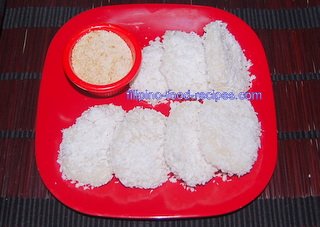 1  Toast the sesame seeds until light golden brown. Ground or pound as finely as possible. Cool and mix with the sugar. Set aside.

2 Make a glutinous rice dough by mixing the flour and water.

4 Boil a pot of water. Shape each ball into 2 inch cylinder, then flatten to make like an oval shaped disc.

5 Shape each ball into 2 inch cylinder, then flatten to make like an oval shaped disc and drop one by one on the boiling water. Once they float to the surface, scoop them out and dredge on shredded coconut.

6 Serve with the sugar-sesame seeds mixture on a separate plate.