Rellenong bangus is a stuffed and fried milkfish,  usually a party or special occasion food mainly because it is not a quick, simple dish to make.

This is one of the specialties of the province Pangasinan because of the abundance of bangus in that province.

I use fillers or extenders like potatoes and carrots, which are sauteed with the fish fillet flakes, mixed with a binder of egg and breadcrumbs, then stuffed into the fish skin.

We used to do everything from scraping the insides of the bangus before picking through the bones to make Relleno. Now, thanks to the enterprising fish market vendors in Manila who would gladly prepare the fish for a little extra fee.

Also, the bangus is one fish that is a challenge to fry because the skin almost always sticks to the non-teflon pan and it splatters oil a lot.  So, what I do is pat the skin dry and dredge the whole fish with a thin coating of flour.

The flour helps prevent the skin from sticking to the pan and the oil doesn't splatter as much. 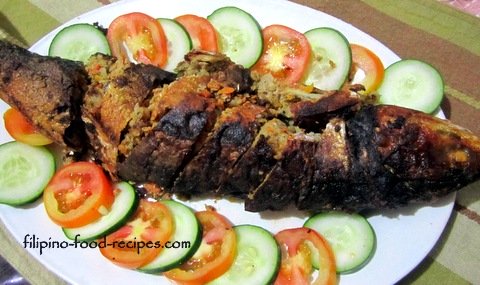 1   Ask the fish vendor to prepare the Bangus for relleno, or do-it-yourself.

2   Wash the fish head and skin and marinate in soy sauce and calamansi juice.  Set aside.

3   Fry the potatoes until lightly brown,  and remove from the pan.

4   Saute the garlic and onion in 2 tablespoons oil, then add the fish meat, potatoes and carrots.

5   Season with salt, pepper and Magic Sarap (optional), then turn the heat off and set aside to cool down for at least 30 minutes.

6   Once cooled,  mix in the raisins, together with the beaten egg and breadcrumbs.

7   Stuff the fish through the belly opening, packing tightly, and sealing the opening with a toothpick(or do the traditional needle and thread seal).

8   Pat the skin dry and flour and sprinkle some salt and pepper.

10  To serve,  slice on the diagonal, remove the toothpick or thread seal and serve with ketchup dipping sauce on the side.