Latik : How To Make The
Sweet Sticky Rice Topping

It is made from coconut cream curd that has been evaporated and fried on its own fat.

Cooking this famous topping is easy - the tedious part is just extracting the coconut cream.

Coconut cream, most commonly called kakang-gata in Tagalog is the first extract from shredded coconut.

It is a thick, rich liquid that is used to flavor a lot of native delicacies.

The cream is left on the pan to cook by itself and mixed only when the all the liquid has evaporated and the curd that remained in the pan started to fry up.

Have you heard about the superstition that there are folks who, not by their own fault, are not able to make a decent latik because they have mainit ang mata, or it's like when they look, stare or even just laid eyes onto the frying curd, the curd sort of stops developing and not much oil comes out that you won't even enough of both to top a Biko? 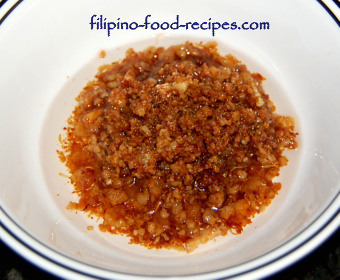 Let's just hope you're not one with those kind of eyes...

1  Extract the coconut cream from about 2 cups of shredded coconut meat.

2 Set the extracted cream on a shallow pan and simmer on medium low heat. Leave it alone.

3 Once the liquid has all evaporated and the oil started to come out, set the heat to low.

4 Scrape the curd from the bottom of the pan to prevent it from sticking. Let it fry by itself.

5 Mix only when it starts to toast to even up the color.

6 Remove from heat when slightly golden brown, it will continue to cook from the hot oil.

Return to Filipino Cooking How To's